Anezka Leonsmane is an aasimar favoured soul of Sune. She is a knight of the Beldin Opal, and one of the founding members of the Lion Legionnaires . 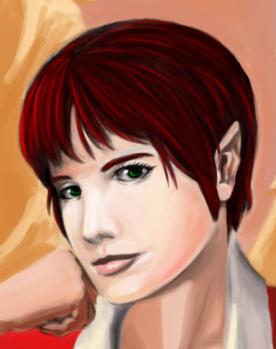 She is married to Gerald Leonsmane , and has a son named Talisid.

Anezka is played by I'kai.

Anezka was born on spring equinox, the 19th of Ches 1360 DR to Pavel and Anna Novak, minor nobility of a barony in Chondath. While welcome, the birth brought many questions. Her unusual features brought accusations of infidelity as neither of her parents had such vivid, red hair and her emerald green eyes were equally foreign to either side of the family. The matter was soon explained by a priestess of Sune who claimed that the girl was not only an Aasimar but a favoured of the goddess. It was Sune's eyes and hair that the child bore and the date of her birth only seemed to confirm the matter.

Anezka's parents took to these news with mixed feelings. Their girl was their only child, their dynasty fading and to have their daughter sent away to live at the temple as a member of the clergy was a fate usually reserved for superflous children impossible to marry off into other families. Still, the temple promised her a good life as an exhalted and revered servant of the goddess. A far better one than the trials of an impoverished fading noble.

Her life was a fairly sheltered one, learning to understand the ways of Sune, the complexities of the many forms of love people share and also the appreciation of art and its history. Her education was solid, if a bit one sided and when not being thoroughly indoctrinated into her holy path, the now young woman pursued the attentions of a number of devoted admirers.

Never a mean spirited sort, she seemed almost incapable of comprehending the self serving and vicious games the boys played to win her over. Possibly due to her celestial nature. She was likewise oblivious to the horrific heartbreaks she dragged them through by leading them on. A behaviour she eventually outgrew...

After coming of age, Anezka felt a strong compulsion to travel and spread awareness of Sune's love. Her time at the temple had passed and the clergy recognised that their goddess needed her favoured more than they might know. It was during these travels that she eventually felt Sune's call for a grand service. Letting Sune guide her steps, Anezka found herself stepping through a strange portal, appearing in the middle of the Fearthegn's bar in Beldin.

She found a kingdom at war with all manner of horrors. An unhappy state of affairs made worse by the people's recent loss of trust in the Sunite faith due to the misdeeds of a particular priestess. The kingdom had no dedicated temple either, save for a small shrine in the royal castle, locked far away from the public eye. With her path clear, Anezka set about restoring the good name of Sune in the valley as best she could.

When the plague came to Beldin, Anezka did her best to heal the afflicted but sadly ended up catching the disease, herself, drifting into a coma. During her worst illness, she found herself in a house prepared for her in Brightwater. Sune's presence gave her the choice to stay or to return to the world and all its trials. For choosing the latter, Anezka grew a pair of magnificent wings as a sign of Sune's favour. Something that further enhanced her angelic appearance.

During this time, thanks in large to her good nature, she befriended many in the valley. In particular, the paladins Edward of Lathander and Xerxes of Helm. Sadly, Xerxes gave his life in the 4th winter war to close a reinforcement portal made by Astrid's Aurilian scourge. To make matters worse, Edward gave his life in the later Adamantine conflict against an undead horde, leaving Anezka heartbroken and lonely.

The matter was alleviated somewhat by a strange prophecy told to her by a fortune teller one God's day in Riverfern. It was said that she was to find her true love after all and that she was to have a son. However, the boy would bring ruin to all that she had built up. Anezka clung to this hope and conveniently ignored the unpleasant part of the prophecy to a degree, though she was continually hounded by visions of a monstrous infant...

In the years following the 4th winter war, Anezka took the opportunity to aid the establishment of the Astrid keep and its order , making sure to solidify the good faith in thanks to Sune by setting up a shrine in the local temple.

Following the demongate crisis, Anezka decided that her ideals didn't quite mesh with the methods of Astrid's knights and eventually left the order to help her longtime friend Gerald Leonsmane cleanse the corrupted temple of the Red Knight and establish the Lion's Legionnaires with the temple fortress as its headquarters, even establishing a proper art gallery in Sune's honor.

With the wars seemingly over, Anezka and Gerald eventually admitted their feelings for one another and married on summer solstice 1410 after a lengthy engagement. Their happiness was short lived, however, as the invasion of the otherworldly Halmadrians saw Gerald removed from the very material plane and presumed dead. Some 9 months later, however, they were reunited.

Soon enough, Anezka found herself with child. Remembering the prophecy, she felt truly blessed. Surely the time for peace and happiness had finally come! Ironically, much like her own birth, that of her son was greeted with mixed emotions and accusations. It would seem that shortly before Gerald's return, Anezka had been deceived and impregnated by a demon posing as her beloved!

Difficulties aside, the Leonsmanes resolved to treat the little cambion fairly, naming him Talisid and accepting him as family to the shock and disgust of many. While her image has been severely tarnished in recent years, Anezka remains determined to make Beldin a better place for all.

Retrieved from "https://beldin.fandom.com/wiki/Anezka?oldid=5056"
Community content is available under CC-BY-SA unless otherwise noted.