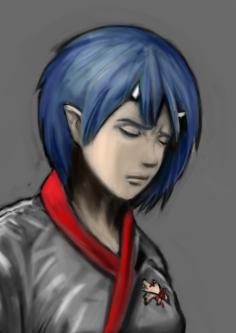 Kassia is a monk of the order of the Broken Ones, one of the more aggressively proactive groups of Ilmatari monks when it comes to dealing with evil and punishing the wicked.

Few families can bear the strain and stigma of a tiefling child and Kassia was left on the steps of a monastery as an infant, her mother expecting the child to recieve some degree of redeeming schooling and protection.

While the monks were generally benevolent, a number of disasters in recent years had made them less tolerant of what they deemed "wickedness". While Kassia was given a place among them, she was constantly reminded of her Infernal nature as something sinful. She was taught that devils are born from mankind's transgressions against good and in carrying their blood, Kassia carried the sins of Man as a whole.

The lesson provoked a severe sense of guilt and shame in the young woman who decided that she would redeem her sinful nature by any means her god would allow. This lead to habitual self harm in penance such as whipping, the use of a tight, barbed chain bracelet and tightly wrapped hands and feet. By exposing herself to constant pain and denying all comfort, the sin was to be denied a foothold and be driven out! Each bout of doubt and "wicked" thought had to be punished. Even her own body fought her redemption! Kassia's unfortunate vow of abstinence (to prevent the spread of her tainted bloodline) meshed poorly with the young woman's longing for company and such temptations and brazen, fiendish lust had to be similarly discouraged!

Understandably, this sort of behaviour wasn't entirely welcome among monks who sought to relieve suffering. Priests were brought to the monastery to talk the young fanatic out of her behaviour but Kassia treated this as yet another "trial" to strengthen her resolve in redemption. The more her behaviour was fought, the more it intensified and it was argued that her degree of self harm bordered on Loviataran corruption. Although they had no proof to support such claims, they decided that Kassia had to leave them.

After many ifs and buts, Kassia was cunningly convinced to go on a journey of self discovery to learn the truth about her sins and return with answers in 20 years. Hoping for her to recover by being exposed to a reasonably tolerant society, they sent her to Beldin.

Kassia is played by Ikai.

Retrieved from "https://beldin.fandom.com/wiki/Kassia_of_the_Broken_Ones?oldid=4806"
Community content is available under CC-BY-SA unless otherwise noted.